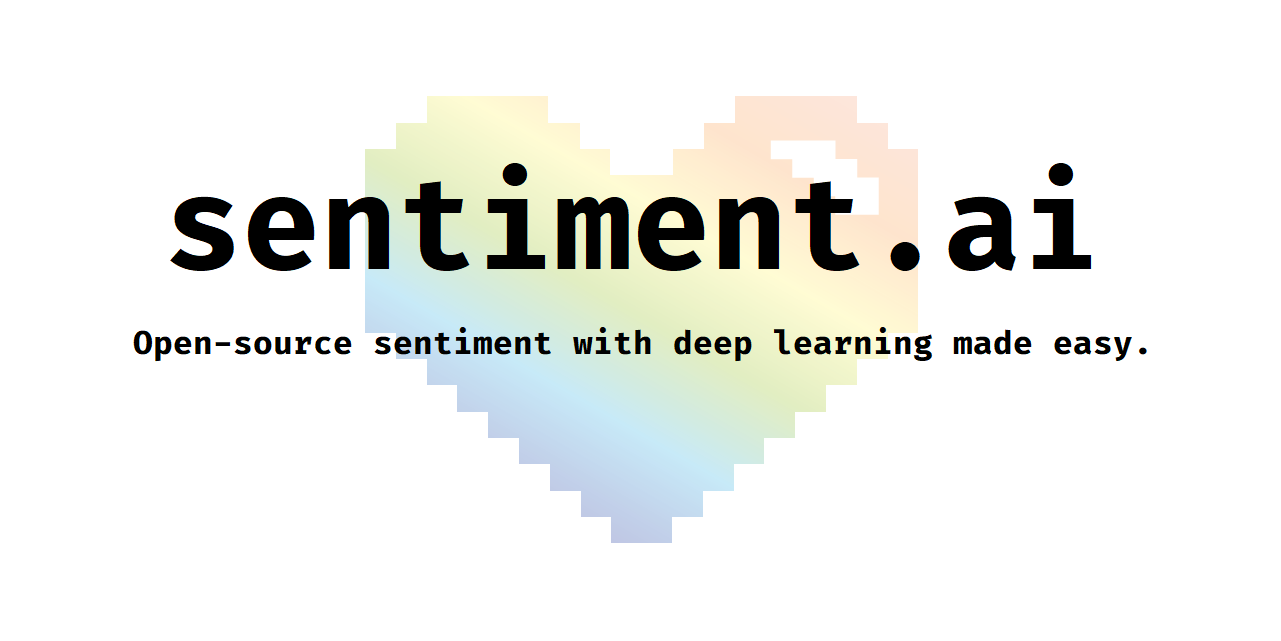 Korn Ferry Institute's AITMI team made sentiment.ai for researchers and tinkerers who want a straight-forward way to use powerful, open source deep learning models to improve their sentiment analyses. Our approach is relatively simple and out performs the current best offerings on CRAN and even Microsoft's Azure Cognitive Services. Given that we felt the current norm for sentiment analysis isn't quite good enough, we decided to open-source our simplified interface to turn Universal Sentence Encoder embedding vectors into sentiment scores.

We've wrapped a lot of the underlying hassle up to make the process as simple as possible. In addition to just being cool, this approach solves several problems with traditional sentiment analysis, namely:

So, what impact does more robust detection and some broader context have? To test it, in real-world scenarios, we use two datasets/use cases:

We use the default settings for sentimentr, the QDAP dictionary in sentimentAnalysis, and en.large in sentiment.ai. We prefer the use of Kappa to validate classification as it's a less forgiving metric than F1 scores. In both benchmarks sentiment.ai comes out on top by a decent margin!

Note that our testing and tuning was one using comments written in English. 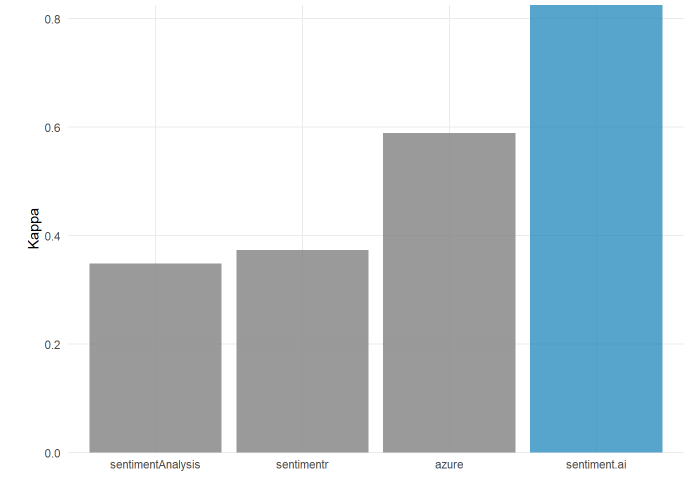 Applied example, estimating whether the text from a glassdoor.com review is positive or negative. The validation set used here is the same data KFI used in our 2020 SIOP workshop

Note: As a part of KFI's core purpose, sentiment.ai's scoring models were tuned with extra work-related data, hence this is tilted in our favor!

Taken from the airline tweet dataset from Kaggle. Classification is positive vs negative (neutral was omitted to remove concerns about cutoff values).

Note: Azure Cognitive Services tune their sentiment model on product reviews, as such this is tilted in favor of Azure! 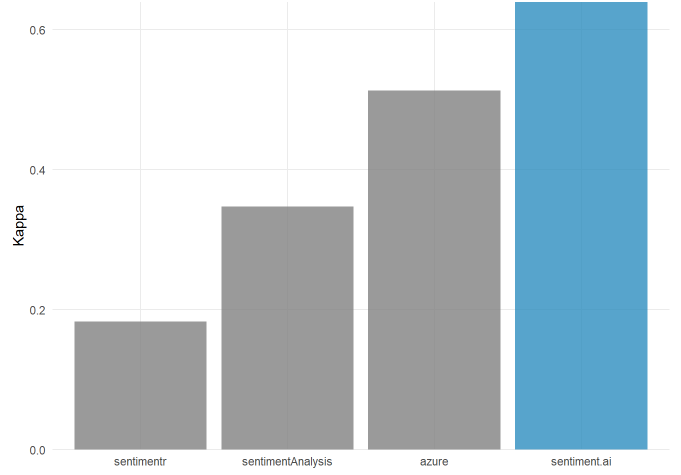 Fierce. It looks like we can be pretty confident that sentiment.ai is a pretty fab alternative to existing packages! Note that over time our sentiment scoring models will get better and better!

After installing sentiment.ai from CRAN, you will need to make sure you have a compatible python environment for tensorflow and tensorflow-text. As this can be a cumbersome experience, we included a convenience function to install that for you:

This only needs to be run the first time you install the package. If you're feeling adventurous, you can modify the environment it will create with the following paramaters:

Assuming you're using RStudio, it can be helpful to go to tools > global options > python > python interpreter and set your new tensorflow-ready environment as the default interpreter. There'salso an option for automatically setting project-level environments,

Note for GPU installations: you'll need to make sure you have a compatible version of CUDA installed. (Here is a helpful guide to pick your CUDA version)[https://www.tensorflow.org/install/source#gpu]

Technically init_sentiment.ai() will give access to a function called sentiment.ai_embed$f() which uses the pre-trained tensorflow model to embed a vector of text. Power users, the curious, and the damned may want to look in (Helper Functions for an example of this magic)[#power-move].

init_sentiment.ai() has the following optional paramaters:

default is envname = "r-sentiment-ai" - only change this if you set a different environment in install_sentiment.ai()

For most use cases, sentiment_score() is the function you'll use.

Returns a vector of sentiment scores. The scores are a rescaled probability of being positive (i.e 0 to 1 scaled as -1 to 1). These are calculated with a secondary scoring model which, by default is from xgboost (a simple GLM is available if for some reason xgboost doesn't work for you!).

The paramaters sentiment_score() takes are:

Note that if init_sentiment.ai() has not been called before, the function will try to recover by calling it into the default environment. If you're using CUDA/GPU acceleration, you'll see a lot of work happening in the console as the model is compiled on the GPU.

Sometimes you want to classify comments too. For that, we added sentiment_match() which takes a list of positive and negative terms/phrases and returs a dataframe like so:

While there are default lists of positive and negative phrases, you can overwrite them with your own. In this way you can quickly make inferences about the class of comments from your specific domain. The sentiment score is the same as calling sentiment_score() but you also get the most similar phrase, the category of that phrase, and the cosine similarity to the closest phrase.

Note Cosine similarity is relative here & longer text will tend to have lower overall similarity to a specific phrase!

Note 2 You can also be tricky and pass in a list of arbitrary themes rather than just positive and negative - in this way sentiment.ai can do arbitrary category matching for you!

A light equivilent of text2vec::sim2 that gives pairwise cosine similarity between each row of a matrix.

This is a helper function to take two matrices, compute their cosine similarity, and give a pairwise ranked table. For example:

If you filter that to only the rows where rank is 1, you'll have a table of the top matches between target and reference.

As an added bonus of manually calling init_sentiment.ai() you can call embed_text() to turn a vector of text into a numeric embedding matrix (e.g if you want to cluster comments).

We want to continue making sentiment analysis easier and better, to that end future releases will include:

Think you can make a better sentiment scoring model? Seeing as I'm far from the sharpest lighbulb out there, you probably can out do me! Simply train a model on text embeddings and add it to the models folder of this repo. Currently we only have support for xgb and glm models (xgb worked really well with minimal faff, and GLMs, saved as simple parameter weights, are super light weight). We will figure out a way to allow custom models, likely with a custom predict script in each model folder, but that's a tomorrow-problem for now.

The models directory contains models used to derrive sentiment after the neural nets have handles the embedding bit.

For example: models/xgb/1.0/en.large.xgb is the default scoring model in sentiment_score(x) which is the same as a user passing sentiment_score(model="en.large", scoring="xgb", scoring_version="1.0").When called, sentiment.ai will pull the scoring model from github if it hasn't done so already (default is installed during install_sentiment.ai()) and apply that to the embedded text.

If you'd like to contribute a new/better/context specific model, use the same folder structure If it's not a glm or XGB, let us know so we can make it work in find_sentiment_probs()! For non-xgb/glm models, please give an example R script of applying it to a matrix of embedded text so we can add support for it.

We only ask that numeric version (e.g xgb/2.0/...) names be left for official/default models. For community models, the version can be a descriptor (so long as it's a valid file name and URL!) e.g: xgb/jimbojones_imdb1/en.large.xgb This way we can keep it easy for less engaged people who want a package that "just works" while accommodating power users that want custom models

If you have a general purpose model (i.e. trained on a variety of sources, not context specific) that out-performs the default ones, get in touch, we'll test some extra benchmarks, and if it's "just better" we'll add it to become the new official/default (obviously giving you credit!)

will add support to pass through custom github urls if you don't feel like sharing. When that's done you'd pass in: repo_url = "https://github.com/